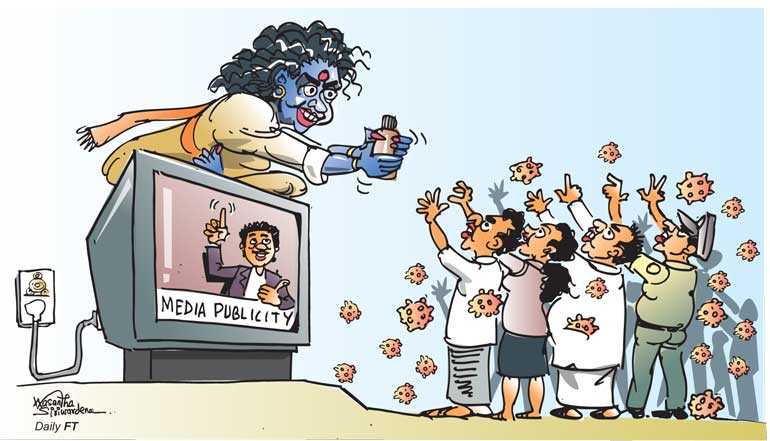 One needs a sense of history to understand our current predicament, especially if we are to drive purpose and context into seeking a solution. Even though we have never been exposed to a pandemic before, Sri Lanka, in the past 140 years or so, has experienced many epidemics. We have had to deal with outbreaks of smallpox and malaria, infectious skin diseases like yaws, and the high death count that accompanied some of those epidemics. Smallpox, which visited us in 1867, raged on till 1936, resulting in 35,473 infected cases and 6,885 deaths.

In the 1890s, our local public health offices were in no position to enforce quarantine laws in the island because the legality of quarantining was being questioned by the magistrate; and back then, nothing could be done in the face of those who resisted the authorities. The law supported forcibly moving people only in the case of some violent act being committed, not for carelessness in spreading disease. It was only in 1896 that the legislation on contagious diseases was amended, and the necessary powers for removal, isolation and disinfection were brought in.

Today, we have more sophisticated laws and systems to manage an epidemic or pandemic.

However, there are other factors to consider as a lot has changed in our social intercourse terrain. This is not unusual because the society the law is attempting to manage has evolved over a century, and the carrot and stick concept may not be the best in managing a disease that has its own quirky way of spreading.

In so much as it is a health and safety issue, it is also a public relations challenge because managing perception is a vital part of managing the pandemic. The media — be it mainstream or alternate digital — plays a big role in forming the mindset of the public. While they play a large role in the process of the management, sensationalism is also a part of the media’s makeup, and demanding answers to so-called burning questions may sometimes be overwhelming. Where did this virus come from? Who is responsible? The questions can be endless, and to all of them, answers are expected pronto. Unfortunately, with the second wave, nobody has absolute answers to many of the questions asked.

In the process, what ensues is a wild blame game, in which the media — which sometimes plays judge and jury — may point their fingers in different directions, giving various differing opinions. It can spread from being legalistic to emotional, community health, scientific concerns, economic downturns to demographic structures. The list goes on. In the process, the waters get muddied and priorities get muddled.

While all this is a given, there is no doubt that we have to learn to live with viruses in the present and future. Environmentalists cite various reasons for the emergence of this deadly microbe, i.e. deforestation, melting of the arctic frost, and the like. That being the case, what we humans have to be most concerned about is not really the virus and how and where it erupted, but how we react to it when it appears amongst us.

So what does this have to do with public relations? A lot, as a carefully crafted communications plan and proper dissemination of information will reduce panic and help people to create safe environments to work and live in. There has to be a strategy that connects to an overall policy, and then we need to stick to it.

If you take the period from March to August and up until now, there is an important lesson in perception management to be learnt. We used extreme caution when there were lockdowns and curfews during the initial months, but when we were let out, attrition set in. The messaging also became different, and with positive signals going out that the country was about to open for tourism and news reports on how little the virus had affected us, people got complacent. We became self-congratulatory, believing that our little island had gotten over the problem and that we could get back to ‘normal life’ — the life we lived without the mask and washing of hands.

But in October, it hit us, and we — like Pontius Pilate — came to the realisation that washing our hands was the least of our problems. As the second wave took us unawares, numbers spiked at an alarming rate and we had to face the reality that something had gone very wrong. Everyone wanted to know who was responsible. State authorities scrambled into a frenzy. Media speculation was focused on fixing an entry point to the virus, as they believed this was the only way the second wave could have started.

It is three months hence that we are getting the first inkling of how it may have happened and even then, we all know it is very difficult to pin the blame on one person or one entity because viruses don’t follow the rules of any game.

So, it becomes more and more clear that the only way to manage this situation is to manage our human reaction to it. Social scientists talk of a phenomenon of human behaviour known as ‘perceptual control’. The perceptual control theory is a model of behaviour based on reasoning out of negative feedback; in other words, our perception of a bad situation within limited boundaries. Josh Kaufman, in his book ‘The Personal MBA’, likens it to thermostatic control; i.e., the same way a heater would come on when the ambient temperature drops beyond a certain point and go off when the temperature rises. But it is this kind of blow hot, blow cold attitude in managing the pandemic vis-à-vis human engagement that got us into this situation in the first place — where we were caught unawares and unready.

While lockdowns, curfews and controlled environments help to reduce human engagement and prevent the virus from hopping from human to human, it also serves as a PR mechanism to put people in the right frame of mind to understand the seriousness of the issue.

However, even this falls under the perceptual control theory, where the lockdown helps us adjust to the seriousness of the situation, and when it is lifted, we automatically get into another mode which prompts us to become less cautious. In other words, while the lockdown is in place, we use extreme caution to get out, but once we are out, we behave in a way that creates the need for us to be locked down. This approach will only continue to keep the virus alive and active in a cyclic pattern. If we are to flatten the curve, there has to be another approach.

Whilst the carrot and stick formula may work for worst-case scenarios, what we need to apply are normative controls. Normative controls govern behaviour through accepted patterns of action rather than written policies and procedures because it uses values and beliefs, i.e., norms, which are established standards. For example, within a team, informal rules make team members aware of their responsibilities.

For instance, hygiene norms in many of our Asian regions, washing of hands and feet, cleanliness before worship, certain behavioural patterns when attending a funeral, etc., are ingrained. In the old days, and still practised by some, were the habits of cleansing thoroughly after a funeral. Even the clothes worn are left outside for washing and not brought in.

In villages, when someone in a household contracted an infectious illness, it was the norm to hang a bunch of kohomba leaves at the entrance to the house. This acted as a signal that would let visitors know they must avoid contact with the family. These were traditions woven into our cultural, religious beliefs which ensured our survival.

But over time, these traditions have eroded, especially in the last 40-odd years. Us Sri Lankans have learnt to depend more on western pharmaceuticals. One drug in particular that has made us throw caution to the wind is the ‘antibiotic’, which we thought was the panacea to all ills. But today, the COVID-19 pandemic has taught us one thing — no longer can we depend on wonder drugs.

A well-executed public relations program is necessary to battle the virus, and this should mainly centre on how to change our behaviour. Macro and micro formulas will have to come together to educate communities on building immunity and breaking the spread of the human-hopping virus. At the risk of social engineering and profiling, our new societies will have to build walls around behavioural patterns. Although this may sound like something from a science-fiction novel, we have to face the fact that it is necessary to build communities that will insist on certain behavioural norms for social engagement. The liberals have a term for this, i.e., bigotry. While bigotry — especially in today’s terms — may not have a pleasant ring to it, that might be the only way to stay safe and stop the spread. We will have to go back to our ancient, inward-looking formulas that are not alien to us Asians.

We have to build a set of values, beliefs or norms, that are shared by members of one group and taught to new members who join in. This is diametrically opposite to liberal western ideology that is all about becoming independent. As Asians, we still hold our family values high, and it is all about interdependence, not independence. Therefore it should not be difficult for us to regain our cultural values and look inwards during this ‘new normal’.

With recent local news reports continuing to highlight several new COVID clusters, we associate the word ‘cluster’ with negative connotations. But this need not be so. Clusters are in fact excellent samples to develop and practice norms because they are closed groups of people. Given the experiences some apparel industry clusters gained in battling the virus, they can well become centres of excellence in teaching prevention and how to sustain defence lines. This may become a necessity going forward, as pandemics and viruses may become the norm rather than the exception.

But in doing so, we have to first agree that changing the perception of behaviour is the way forward — not waiting for vaccines to fix things. And it could be done, not by edicts and laws but through belief systems that are culturally acceptable and by taking the normative control route.

(Tyron Devotta is a senior journalist and public affairs specialist with over 40 years of experience in the media. He can be contacted via email at This email address is being protected from spambots. You need JavaScript enabled to view it.)