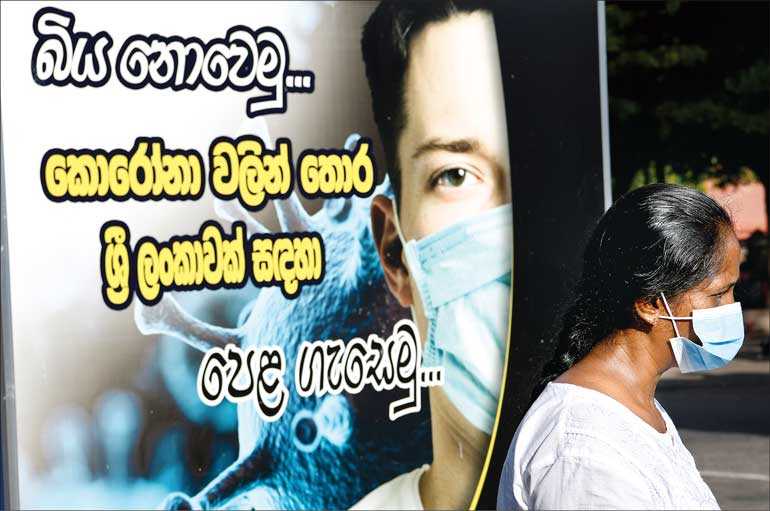 In this relentless battle against COVID-19, there are two types of fighters; one that is waiting for the vaccine and the other that is looking for indigenous cures. This division is almost religious in fervour. They are the believers on either side of the divide. The liberal elite against the rural conservatives — if one dares to label them.

The heightened enthusiasm with which our local “pani” was sought as a cure for COVID-19, reached almost a fever pitch as believers in this indigenous system clamoured for it, literally throwing caution to the wind as they fought to get their share of the potion. The liberal elite sat back and smiled (laughed), sagely shaking their heads as they looked down on the follies of the hoi polloi, safely tucked away behind their barricades waiting for the vaccine – their silver bullet.

This is not the first time our little island is facing a pandemic in recent history (and this writer is not referring to the Spanish Flu). Cholera first broke out as a cross border disease between 1816 and 1826, spreading through Bengal to South and South East Asia to China, before seeping up to the Caspian Sea and receding. The second time cholera re-emerged was three years later in 1829 persisting till 1851. This time it spread from Russia to Western Europe and finally bled into the Americas.

This however was not the last the world saw of cholera. It resurfaced six more times, and Sri Lanka did not go unscathed. Every single outbreak in the 19th century took its toll on us, particularly the northern parts of the country. The first wave of the pandemic alone caused the Mannar area to lose nearly 1/6th of its population.

The dawn of the coffee age in the 1830s had scores of labourers fleeing famine-stricken areas of South India to come looking for employment in Sri Lanka. Some of these immigrant labourers who came to Sri Lanka had already contracted cholera, and thus it seeped into plantations. As the Cholera Commission formed observed in 1867, “year after year sickness has been introduced by the immigrant coolies and village after village has died out or been so reduced that only one or two families remain”. The cholera outbreak during 1866-67 took more than 10,000 lives in the Jaffna Peninsula and was considered the most devastating event recorded in 19th century medical history.

In the book ‘Famine, Fevers and Fear,’ the author, Dr. S.A Meegama, writing on the impact of medical care reducing mortality from cholera says, hospitals in those early days were not equipped to treat cholera patients through rehydration. “The number admitted to hospitals was generally low so that medical treatment and care was not an important element in the fatality rate in the campaign against cholera… The very high mortality rate in hospitals was, of course, not surprising since treatment by rehydration was not available.”

The sheer magnitude of the 1866 outbreak in Jaffna surpassed the control of human agencies and health personnel. It is only around the 1890s, that the scope of the disease was identified and understanding dawned that the dehydration caused by cholera was perhaps more fatal than the disease itself. But even then, treatment by rehydration was not yet available. Today, rehydration has proven to be one of the most effective methods of treatment for cholera.

By the time the last cholera epidemic occurred in 1866, countries, especially those in Europe, were recognising the lack of a correlation between quarantining as a means of evasion and prevention of infection. In a study by Anne Hardy, on ‘Cholera, quarantine and the English preventive system, 1850-1895,’ the author says “Quarantines were a marked feature of government responses to the first and second pandemics; yet they transparently failed to prevent outbreaks of cholera and were often abandoned.”

She says that it was this failure that stimulated the first attempts to achieve an international policy for limiting the disease. The policy came in the form of the first International Sanitary Conference, convened in Paris during 1851, to examine Europe’s position regarding cholera, and to try to establish an international consensus on enforcing broadly uniform precautionary measures. It was the first of a series of such conferences. Anne Hardy, in her study says “the majority of European countries continued to favour quarantine as the means of preventing the entry of sea-borne cholera, but Britain was adamantly opposed to any restriction on the freedom of trade”.

While medical men and diplomats struggled to reach agreement at international conferences - the English preventive authorities evolved and perfected a system of sanitary surveillance coupled with detailed preventive measures such as isolation and disinfection, which appeared to meet the challenge of imported cholera effectively.

What’s significant about this account is understanding. When fighting a pandemic there is no standard operating procedure, whilst in the thick of it, expedience forms the better part of one’s judgement. And most times the solution is in doing the simple things.

While quarantines may be necessary in worse case scenarios, it is not the silver bullet! Just as the simple “pani” may help as a cure, and the vaccine might be preventive. Shobana Cooke, a homeopath, told this writer that the engagement with the virus is totally based on the individual’s immune system. It’s not a one size fits all solution.

Taking what’s happening in the UK currently as an example, she says all indications are that the virus’ mutations might be due to cold weather. “When it comes out of the winter, it’s going to be a different virus to what we saw in the summer. Because the power of the sun and the heat, keeps things a certain way, but in a moist, wet situation, there is another mutation. So this winter was going to be the barometer — for us to see what this virus is going to do.”

What needs to be understood is that we cannot look at models outside our local conditions and think that it is the ultimate solution. We need to look for answers within our genetic structure, and this can extend to our biological, environment, social, cultural, economical and political makeup.

For example the “pani,” which is being labelled by the media as a hoax, cannot be discounted just like that. It might be an Ayurvedic solution to treat symptoms of this virus attack on humans. Bees’ honey which forms the base of the concoction is a well-known curative for throat infections, bronchial asthma, tuberculosis, dizziness, fatigue, hepatitis, constipation, ulcers while being used as a nutritious, easily digestible food for the weak.

However, as Shobana Cooke points out, there has to be an assurance that what’s used in the medicine is pure bees’ honey. “We often use pure bees’ honey in indigenous medicine for blood disorders. It harmonises the blood and in COVID-19 we can manage the blood coagulation factor through this.”

In the same argument, have we taken into consideration the sunny aspect of our island home, whose sometimes almost unbearable heat may well be an antidote to the virus.

As much as the cholera epidemic, which was a far more devastating disease in its time than COVID-19, the lesson learned is that countries cannot put their lives on hold till a solution is found. Thinking of fending off the mutating virus by shutting the borders completely cannot be the solution. We need to create controlled environments to see how it reacts to local conditions.

At the bottom of it all is the question, ‘who really controls the message in bringing harmony to hybrid formulas?’ There is enough evidence to suggest that views on what needs to be done to prevent and cure COVID-19 are diametrically opposite. Will it be homegrown remedies or Western (imported) prevention? While the path to foreign solutions seems obvious, we also need to tap into our local belief systems to overcome this problem. We can put up a conservative estimate that here in Sri Lanka we have greater confidence in local remedies, and will resist the Western preventive methods. This for a myriad of reasons, not least the cost of getting a vaccine.

So the question now is whether we are willing to look on either side of the divide when looking for solutions? While the vaccine and Western medicine may be the path that connects us with a globalised world, can we also rely on glocalised solutions, where we look global yet act local? The latter might be the illogical path, so to speak, if one looks at it from a liberal elitist viewpoint, but as Shobana Cooke puts it — whilst western medicine is a considered science, local remedies are a curative art form.

What is becoming increasingly clear is that the virus is stealthy, and will mutate to adjust to any resistance we put up, from the simple sanitisation of hands, social distancing etc.; its aim, like all living organisms, is to survive and thrive. Unfortunately, that is a risk to humans, the primary organism on planet earth, and to this end there are two solutions available for our survival, to eradicate or co-exist.

This writer believes that quarantine is a method used to kill the virus, while the vaccine as well as local remedies are for coexistence. However, there is an important difference between the vaccine and local remedies i.e. while one is a system dependent on pharmacology, the other builds up immunity through inner resistance. In the case of the vaccine, wouldn’t we need an upgrade with every mutation of the virus?

But for the sake of harmony in our battle against the virus, we can agree that both paths are not in conflict with each other, that they both have human survival as their objective. And so local belief systems must synchronise with global solutions — the same way we Sri Lankan’s would try the “paspanguwa” with paracetamol, when we have a common flu.

In American medical slang, Zebra means arriving at a complex medical diagnosis in a situation which is more likely to have a commonplace explanation. As Dr. Theodore Woodward, Professor at the University of Maryland School of Medicine, told his interns about 80 years ago, “When you hear hoofbeats, think of horses not zebras.” He said this because horses were common in the USA, while zebras were rare – this theory of Dr. Woodward continues to be taught to medical students.

This is not unlike in the cholera situation 100 years ago, where saving lives lay in the simple solution of rehydration. The same goes for COVID-19 today — as much as we focus on prevention, we need to concentrate on building natural immunity that’s a part of our Sri Lankan DNA.

We have to ask ourselves, in the battle with this so-called deadly virus, are we looking for zebras or is the solution simpler than what we think it is?

(Tyron Devotta is a senior journalist and public affairs specialist with over 40 years’ experience in the media. He can be contacted via email, This email address is being protected from spambots. You need JavaScript enabled to view it.)