“If you teach a child art properly, you are teaching the child to get out of the box, to move out of​ its set parameters, and to live dangerously.” She says what adds to a child’s strength of​ character is the understanding that he or she must learn how to get to the edge, leaving behind​ the fear of falling and knowing that if a fall would come, it will only make them stronger. 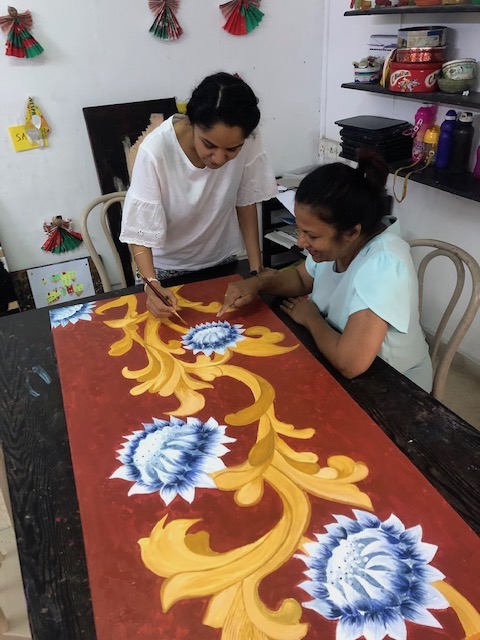 ​Fine arts are not an exact science says Shyamala Pinto Jayawardene, an intrepid traveler in the​ fascinating world of creativity and imagination. Teaching children to explore the right​ hemispheres of their brains, she has spent the last 40 years of her life in the province of​ intuition, insight and holistic thought processes. Shyamala teaches visual arts through all five​ senses and sometimes even the sixth.

“If you teach a child art properly, you are teaching the child to get out of the box, to move out of​ its set parameters, and to live dangerously.” She says what adds to a child’s strength of​ character is the understanding that he or she must learn how to get to the edge, leaving behind​ the fear of falling and knowing that if a fall would come, it will only make them stronger.

Delving into this complex world where Shyamala lives and teaches, it is easy to understand why​ she explains art as more of a subjective form rather than an objective science. She says there​ is so much of experimentation needed at student level. “You must know the difference between​ having fish and chips at McDonald’s as opposed to having a fried ‘wew malu kella’ with a fried​ piece of chili. You must know the difference and you must learn to appreciate all of it - to eat​ food served on a ‘nelum koley’ with as much enjoyment as you would, ​ eating some fancy meal​ somewhere.”​

Shyamala is of the view that every teacher has to be reservoir. “You have to be bubbling with​ resources, giving your students all the different sorts of things they need, to become their​ ​own​ person.” She observes that we, as human beings tend to focus our intellectual​ ​development solely on the​ left brain, which is a system that can only be considered rather archaic. “We harass our children​ to develop maths and to develop science subjects. But we don't talk about the right brain.”​

Stressing on the importance of balance she says the anatomy of a human being is constructed​ in such a way as to accommodate the simultaneous functioning of both the left​​ brain and the​ right brain. However, centuries and centuries of focusing our attention on the​ ​development of​ ​the left brain has made what we call a “balanced human being” almost redundant.”​

Cambridge professor, Shankar Balasubramanian who was knighted recently by the Queen,​ says left brain education is of no value if the right brain is not developed. If we continuously​ developed the right brain faculties, the left brain will be balanced and the two sides will even​ complement each other, thereby facilitating the creation of a human being who is balanced in​ everything he says and does.​

“I keep saying, education has to change. Just driving children to become ​doctors and​ accountants - i​t's not going to happen, they​'re not going to have jobs in times to come. They​'​re​ going to have this piece of qualification and will have to stay at home” says Shyamala, in light of​ the explosive development of technology. She adds that when speaking to her students, she​ reminds them of the need to find ways in which their skills can be used so that it makes them unique, instead of competing, which is what today’s children are being raised to do. “What you​ have, the other man doesn’t have. But what you have, make use of it in the best possible, and​ that will be better than anything else that you get or give,” is her advice to her students.​

Located at No. 3 Siripa Road, the​ Shyamala School of Art is the only private institution in Sri Lanka with British Council​ accreditation to offer Art and Design as a subject right up to Advanced Level. The school preps​ students for Art and Design as a subject for both Edexcel and Cambridge examinations and​ also facilitates Art & Design students who wish to do London O/Ls and A/Ls privately, by helping​ them to sit for subjects such as Psychology, History and English Literature, via the school.​