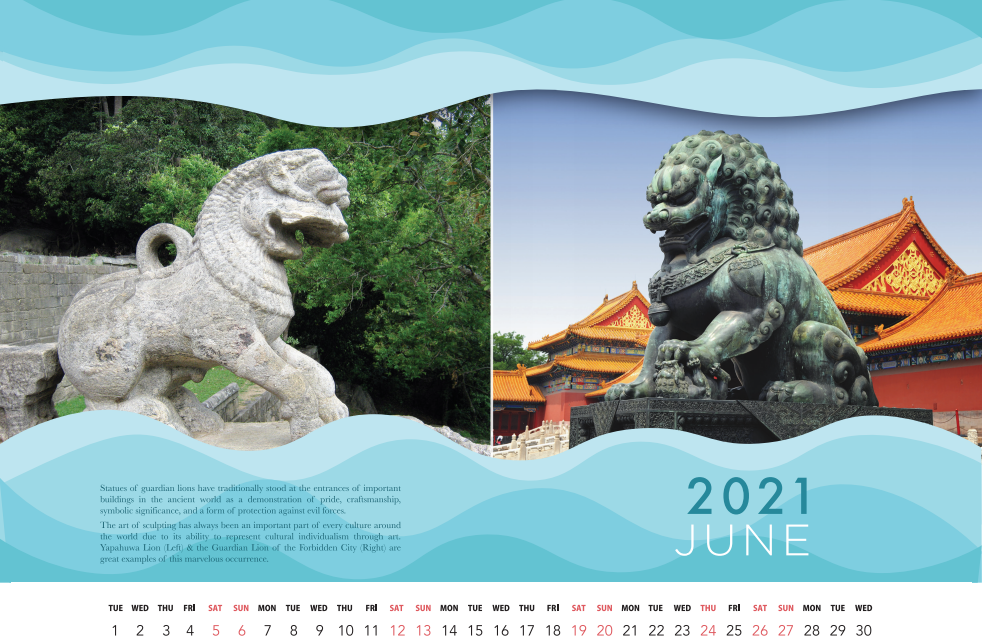 The June 2021 page of the Port City Colombo calendar showcases two big cats, the Yapahuwa lion (Sri Lanka) on the page left and the guardian lion of the forbidden city of Beijing, China on the page right, both majestic and ancient. The Port City is drawing parallels between the historic cultural similarities the two countries (Sri Lanka and China) share, in their colourfully illustrated desk calendar.

There is a connection between these two lions that takes us back to the 13th century rock palace of King Buvanekabahu I, who ruled as King of Dambadeniya during the 13th century.

Kamanthi Wickremasinghe, in an article written for the Daily Mirror about the Yapahuwa Lion says, “what is quite unique about this lion sculpture (the Yapahuwa lion) is that it is a hybrid between a lion’s face and a dragon’s body. Legend has it that although the sculptures were done by local craftsmen many of its designs were influenced by Chinese culture. Several other archaeological excavations have proven that Buvanekabahu’s hill-top kingdom had close diplomatic ties with the Chinese. During early excavations, several Chinese ceramics have been found, and they were known to be some of the finest specimens found in the island.”

Historically, Imperial guardian lions were used by the Chinese as a traditional architectural ornament. Usually made of stone, these lions or shíshī in Chinese, became popular in Chinese Buddhism, as a mark of protection to guard buildings against harmful spiritual influences or people. Originally used in imperial Chinese palaces and tombs, the lion concept soon spread to other parts of Asia including countries like Japan, Korea, Tibet, Thailand, Burma, Vietnam, Nepal, Singapore and Sri Lanka. (Source: Wikipedia)

That is probably the explanation for the Yapahuwa lion sculpture that guarded King Buvanekabahu’s hilltop kingdom, and bears a resemblance to the guardian lion of Beijing. Yapahuwa, which lay between Kurunegala and Anuradhapura, was built around a giant rock almost 100 meters tall and had been a great showplace during its heyday, with a magnificent stairway and the famed lion dragon hybrid. According to Wikipedia reports archaeological excavations seem to corroborate legends of Chinese influence as early excavations are said to have found several of the finest Chinese ceramics, celadon pottery pieces and more than 1000 Chinese coins.

As an online travel website ‘Travel Lanka Compass’ records, the Yapahuwa Kingdom which had for a short time been the capital of the island, was located in the center of a large trade network. The page refers to fine pieces of porcelain which were evident during that time, a material made only in China and the rest of the Far East back then. It is said that medieval China had a vast marine trade route, as well as an overland one i.e. the Silk Route and that both routes were used to reach Sri Lanka. The account also refers to the Chinese coins and some Buddhist relics consisting of statues and paintings which date back to the Kandyan Kingdom from much later, judging by their colors and design.

According to historical records, Sri Lanka was a land rich in natural resources, which attracted traders from foreign lands. Ties between Sri Lanka and China are said to date back to 429 AD when two monks had travelled to China to establish the Chinese Buddhist clergy community there. During the fifth century, a Chinese Buddhist monk had visited Sri Lanka, justifying stronger cultural and religious relations between the two countries.As Sir James Emerson Tennent, a Colonial Secretary of British Ceylon from 1845 - 1850, writes in his book “Ceylon,” Sinhalese ambassadors who visited Rome during the reign of Emperor Claudius stated that their ancestors had reached China by traversing India and the Himalayan mountains long before ships had attempted the voyage by sea. “...as late as the fifth century of the Christian era, the King of Ceylon, in an address delivered by his envoy to the Emperor of China, shows that both routes were then in use.”

Sir James recounts of translated extracts from 24 Chinese writers, from which he had compiled facts relative to the knowledge of Ceylon possessed by the Chinese in the middle ages. He quotes from the ‘Tongue Teen, ‘Cyclopaedia of History’ by Chinese writer Too Yew, “according to the tongue-teen , the intercourse between them and the Sinhalese began during the eastern Tsin dynasty AD317-n 419; and one remarkable island still retains the name which is commemorative of their presence. Salang, to the north of Penang, lay in the direct course of the Chinese junks on their way to and from Ceylon, through the straits of Malacca, and in addition to its harbour was attractive for its valuable mines of tin. Here the Chinese fleets called on both voyages; and the fact of their resort is indicated by the popular name ‘Ajung-Selan’, or ‘junk-Ceylon’; by which the place is known, Ajung, in the language of the Malays being the term for ‘large shipping,’ and ‘Selan,’ their name for Ceylon.”

The Port City calendar through its 12 page course, illustrates several iconic parallels of the two countries, from exotic festivals, masked dancers of China and Sri Lanka, heritage sites like Sigiriya and the Great Wall of China, architectural wonders and colourful lanterns, to the most common connection all — Buddhism and tea.

Built on the latest sustainable city designs and smart city concepts, Port City Colombo, is tagged to be the next wonder city which is touted to be the most liveable in South Asia. This year marked the project's sixth anniversary and development is well underway with the reclamation of 269 hectares of land from the sea completed early last year. The project company is currently undertaking phase one infrastructure development activities, which are scheduled to be completed by August 2021.

In December 2020 LOLC Holdings PLC's strategic investment arm, Browns Investments PLC entered into a memorandum of understanding (MoU) to partner with China Harbour Engineering Company Limited (CHEC) to commence the mixed development project, Colombo International Finance Center (CIFC) in the Colombo Port City (CPC). Once completed, Port City Colombo will have over 5.6 million square meters of built space, which is expected to be the best in design and standards. According to plans, the wonder city’s lifestyle and business offerings will be world-class with special spaces for Healthcare, Education, Entertainment, Hotels, Restaurants, Retail and Office with an integrated resort and a marina, offering the best in living by the sea.