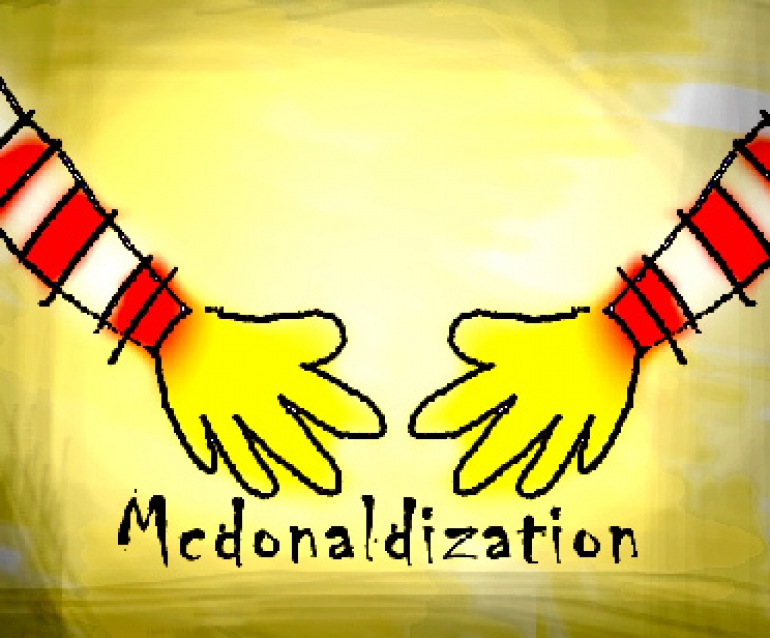 Last week was a holy week for traditional Christians all over the world. There were many days to be observed such as the Sunday before Easter, known as Palm Sunday and the Thursday of that week which is called Maundy Thursday, observed by Catholics as a remembrance of Jesus Christ’s last supper with his apostles.

Good Friday is the day Christians remember as the day Jesus was crucified and died. Easter Sunday, with which the week comes to a close, is a day of celebration, when the resurrection of Jesus is commemorated and Christians across the globe wish each other a Happy Easter.

Festivals have become very international in today’s global scenario, and what with Facebook and other social media platforms becoming vastly popular and short messaging (SMS) taking high priority in the order of today’s communication, we can have people from all over the world wishing each other on the simplest of occasions. Speaking of that, I had this strange greeting from a friend on Good Friday. I am aware that he is not a Christian but he had taken the trouble to send me this message, which read: “May the Lord’s sacrifice light up our way into eternal bliss. Good Friday!”

I did not know how to answer this. Usually if one is greeted with a Merry Christmas or a Happy Easter, one would say thank you and wish you the same, but Good Friday is not a day which brings forth such greetings – or any at all, for that matter. It is observed differently; some Christians look upon it as a day of mourning. Therefore, I had no idea how to respond to my friend’s wishes and even though I knew they were well intended, remained silent on my reply. My confusion proves that we are creatures of habit and that there is a certain sense of security we get from the mundane. When it comes to consumption of products and services or greetings, we look for certain standards that govern these. I found a term that encapsulates this human behaviour of ours. A term that’s modern, yet at the same time comforting: ‘McDonaldization’.

Ritzer highlights the four primary components of McDonaldization as efficiency, calculability, predictability and control. Efficiency is the optimal method for accomplishing a task. In this context, Ritzer has a very specific meaning of ‘efficiency,’ the optimal method equates to the fastest method to get from point A to point B. In the example of McDonald’s customers, it is the fastest way to get from being hungry to being full. Efficiency in McDonaldization means that every aspect of the organisation is geared toward the minimisation of that time. Calculability says Ritzer is an objective that is quantifiable. McDonaldization developed the notion that quantity equals quality, and that a large amount of the product delivered to a customer in a short amount of time is the same as getting a high quality product. This allows people to quantify how much they’re getting versus how much they’re paying.

Predictability falls into the category of standardised and uniform services. It means that the product or service at any McDonald’s outlet would be identical. The uniformity also applies to the workers in the organisation. Their tasks are highly repetitive, highly routine and predictable. Control is about standardised and uniform employees, replacement of human with non-human technologies.Ritzer says in his book that the process of McDonaldization can be summarised as the way in which “the principles of the fast-food restaurants are coming to dominate more and more sectors of American society as well as of the rest of the world”. The lack of standards can hamper progress. Some standards could even be our right to expect, especially here in Sri Lanka, where we somehow seriously lack them. This is true even when it comes to some of our big brand names. I saw a recent report, which said that soft drinks can turn toxic if they are exposed to the sun. What are we really doing about that? Don’t we need some storage standards to ensure safety? I also know that pharmaceuticals can lose their effectiveness if they are not stored under stipulated conditions, exposing them to heat and light could render them useless. Are we creating standards to prevent that? I have seen a certain brand of tinned fish in the supermarket which promises prepared chunks of fish, but I am not sure that what is offered is the real thing. For that matter, how much of meat is there in our burgers or the processed foods we buy? Just the other day, I ordered barbecued chicken wings from a popular takeaway outlet and the food, when it came, was spoilt. Also, why is there a difference in the packaging of black label whisky at the departures and arrivals lounge duty free outlets at the airport? Many even say there is a difference in the taste. So are there standards in our country that protect consumers from such ill deals? McDonaldization might sound like a dirty word in this world of variety, but I believe that it is a start towards setting standards in this unpredictable consumer world we live in. Last Sunday I saw a report in the papers saying ‘Price tags on all products are a must from 1 May’ – this is a great step in the right direction, as standardisation is something even reputed supermarkets don’t follow.

It is encouraging to see the Consumer Affairs Minister waging a battle to bring in these standards. But until our supermarkets, retailers and manufacturers understand that standards are rules to live and do business by and not merely a set of game rules that can be broken when the umpire is not looking, we are not going to see the light at the end of the tunnel.