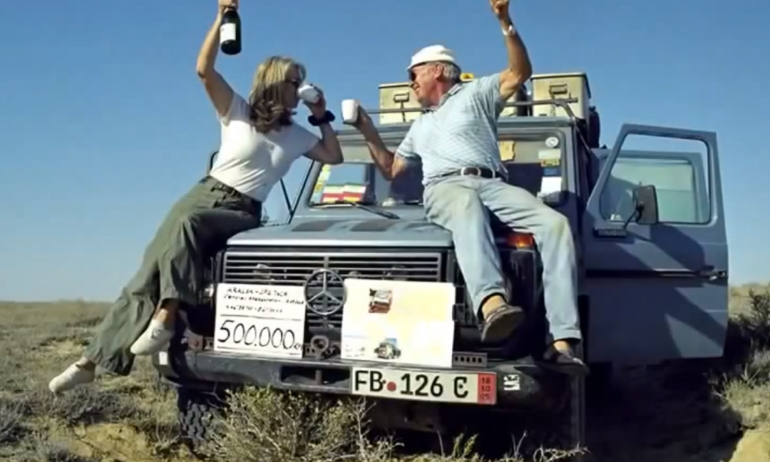 With the war ending, there is so much talk of tourism and it’s true tourists are coming here by their numbers; the hotels are filling up, the price of rooms are hitting record heights and the industry is set to boom.

The groundwork for the organised group tour and the so-called Free Independent Traveller are well set. We probably need more rooms in the future and that matter too is now in the hands of investors who are expected to take on the development of Sri Lanka’s hospitality industry. A very nice picture, but are we missing something here? What about the traveller who does not want to fit into the confines of an organised tour – what about the backpacker?

I recently met a backpacker of a sorts, a 73-year-old gentleman called Gunther Holtorf, who travels around the world in a Mercedes 300GD which he has converted into a kind of caravan which carries all the basic amenities and necessities for the nomadic life he leads, which includes bedding, cooking utensils and over 400 spare parts for his vehicle in case of a breakdown in the middle of nowhere. He has been travelling the world for almost 20 years.

There is one thing about Gunther. He doesn’t like to stay in a hotel. The open skies in a hammock tied to the end of his four wheel drive and the other to the end of a tree is his style. The food he cooks on a gas cooker he carries along makes him a gourmet meal and he has enough supplies stocked up to meet with almost any emergency.

Gunther was here in Sri Lanka for two weeks, during which he travelled to the four corners of the island and today he is a walking advertisement for Sri Lanka. What’s interesting about this type of traveller is that they experience and feel a country or place in an entirely different way to the regular tourist. If it is a bad report, this kind of traveller will be the first to give it.

But we need not have any fears from that quarter. Sri Lanka is currently up on the mantle, a showcase for good tourism and we need people to come and see our country in different ways. We need to also develop a backpacker concept and not dismiss these travellers judging by their appearance. They may look rather rough, tumbled and scruffy, giving the impression that they may not spend much, but is that really true? Do we actually have any proper statistics about this type of traveller? As a matter of fact, I have heard that this segment of tourist is not encouraged in Sri Lanka, as the tourism sector is busy pushing for the so-called high-end tourist.

A quick internet search got me to a document called the “Development of Backpacker Tourism in Western Australia”. Here the statistics, even though a bit old, said that “Backpackers are tourisms’ biggest spending visitors. Research has shown that on individual basis backpackers spend up to four times as much in Australia as do mainstream visitors.” When I spoke to Gunther after his visit to Jaffna, he had so many good things to say. Not so much about its scenic beauty, but more about the experiences he had there. Even the war ravaged areas were something of an experience to him.

A significant fact about this type of tourist is that they are not the camera-clicking type rushing around looking for scenic beauty. This is the type who want to spend more time, a couple of months in a place sometimes, absorbing the local culture and spending their money at a much slower rate, but nevertheless spending it.

Here is another story. During the last Sinhala and Tamil New Year, I was at a hotel down south, and I met a couple who had visited Sri Lanka for over 17 times. They stayed in the same hotel every time. I was pleasantly surprised and asked them whether the war during this period did not bother them. His answer to me was that he spent his annual two weeks stay inside the hotel, and ventured out very little, so the war and its dangers had no effect on him.

Keeping the tourist within the confines of the resort hotels and giving them planned tours in safe areas was probably a good strategy during the bad times. But now we need to change from this frog in the well policy and open the whole country for tourism.

We need to look at the Lonely Planet type of tourist too; the type who wants to experience the journey rather than the destination. It’s a whole paradigm shift in the way we would look at tourism, but a timely and necessary one.

As one CEO from a top inbound tourist company told me, we have to look at these people who visit Sri Lanka as future high-end tourists. He says that he himself has encountered many tourists who had travelled to Sri Lanka as hippies in the sixties and seventies who now stay at our resort hotels.

The profile of a backpacker is an adventurous, curious, discovering the world plus oneself kind – something that cannot be done from the confines of a resort hotel. And in the West it is usually this type of person who moves on to become successful in the corporate world.

Our advertising and PR strategy should let the country sell itself. These backpackers are the type who will use social media a lot, who will blog and comment on Facebook; and what they say will be spontaneous, therefore credible and a great selling tool.

Most of us locals have a wrong impression of backpackers (probably because of their appearance); it’s only countries like Australia and some in the West that have understood the value of this segment and nurtured them. So isn’t it time that our tourism gurus start developing a backpacker’s brand for Sri Lanka?