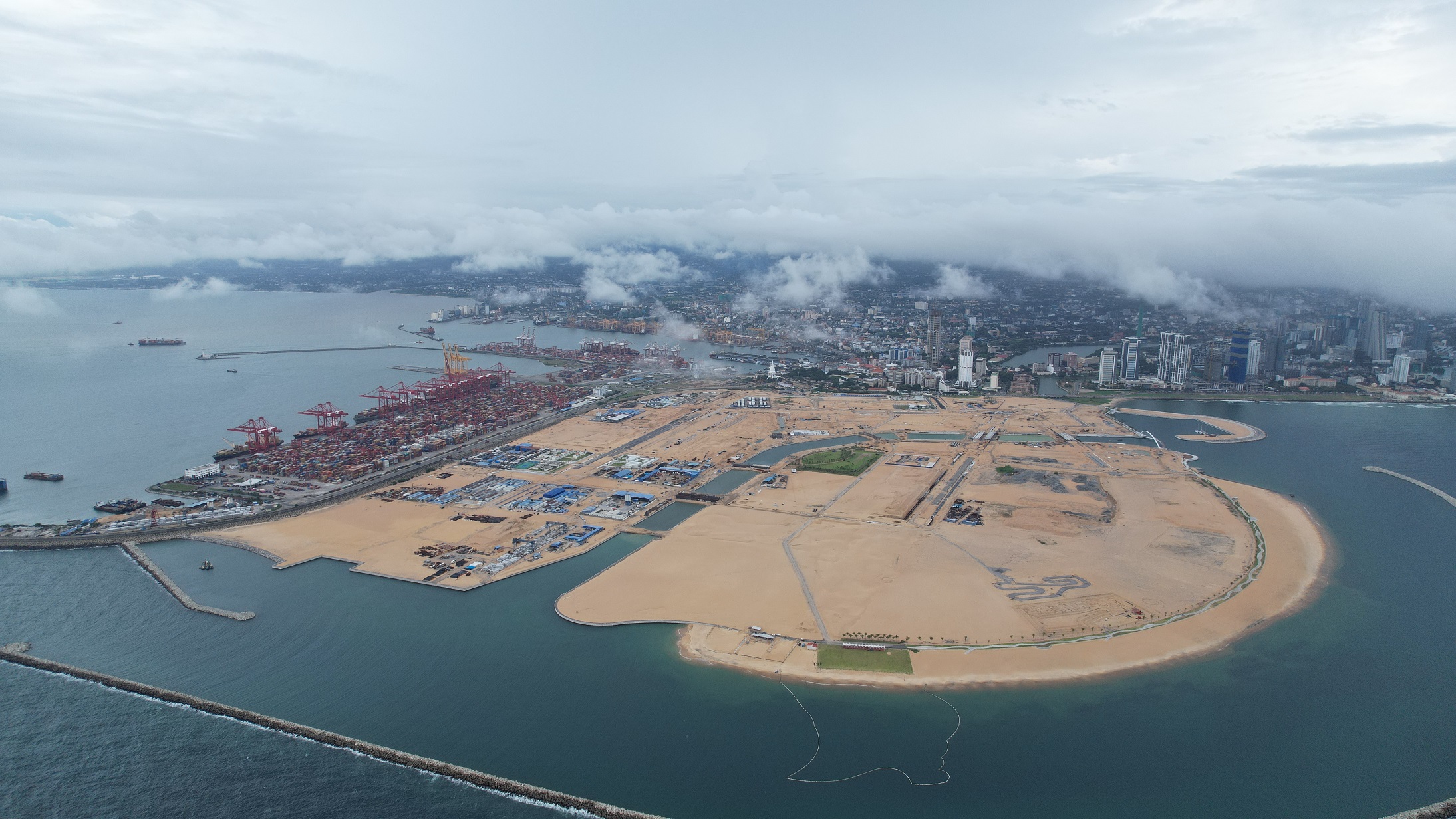 What value does the Port City Colombo have for Sri Lanka?  From a purely transactional point of view, selling the reclaimed landmass for a quick buck (dollar) and sinking the monies into the country’s oversized national debt may seem like a viable answer.  But then the question — is the Port City Colombo a mere buy and sell option or is there more?

In Sri Lanka we need to realise the value of the country’s cities, especially Colombo, and what they can do in terms of national GDP figures.  While nation building is a good thing, it has probably been our only plan since independence.  National economic growth (overall) has taken centre stage, rather than giving special focus to the sustainable development and growth of cities.  Cities have great potential in growing a country’s GDP, and there are outstanding examples across the world to hold this theory.  New York, Shanghai, London, Paris, Moscow, Cairo, Istanbul, Mumbai and Delhi are some of these.

While some might argue that Sri Lanka lacks potential because it does not have economies of scale, this setback can be circumvented by initially benchmarking the business model of the Dubai International Finance Centre (DIFC), which has become a dynamic global financial hub connecting the MEASA region (Middle East, Africa, South Asia) with Europe, Asia and US markets. As the region’s leading financial centre powering the growth of Dubai and the wider UAE, the DIFC holds over 20% of the UAE’s financial services balance sheet. Many of the world’s leading banks, financial and innovation companies, insurers, consultants and startups have set up operations in the financial city which continues to grow year on year.  The zone has strongly supported Dubai’s vision to broaden its economy, and the DIFC’s contribution to GDP has risen from 5.5% in 2004 to more than 12% today.

However, the critical factors for Port City Colombo becoming another DIFC in the South Asian region, driving an FDI pipeline to the Special Economic Zone would be a regulatory framework on par with countries like Dubai, Singapore and Labuan etc.

The Colombo Port City Economic Commission, which was passed as an act in parliament in 2021, allows the new city to operate and function as a special economic zone (SEZ) in the region.  The Commission will act as a single-window facilitator for those who engage in business or invest in the SEZ and Financial Centre.  This would provide immense development and expansion opportunities for Sri Lanka’s service sector. Some of the key functions of the Commission would be to develop and approve environmental standards, monitor, and enact environmental improvements, and co-operate in entering into agreements with other foreign entities. 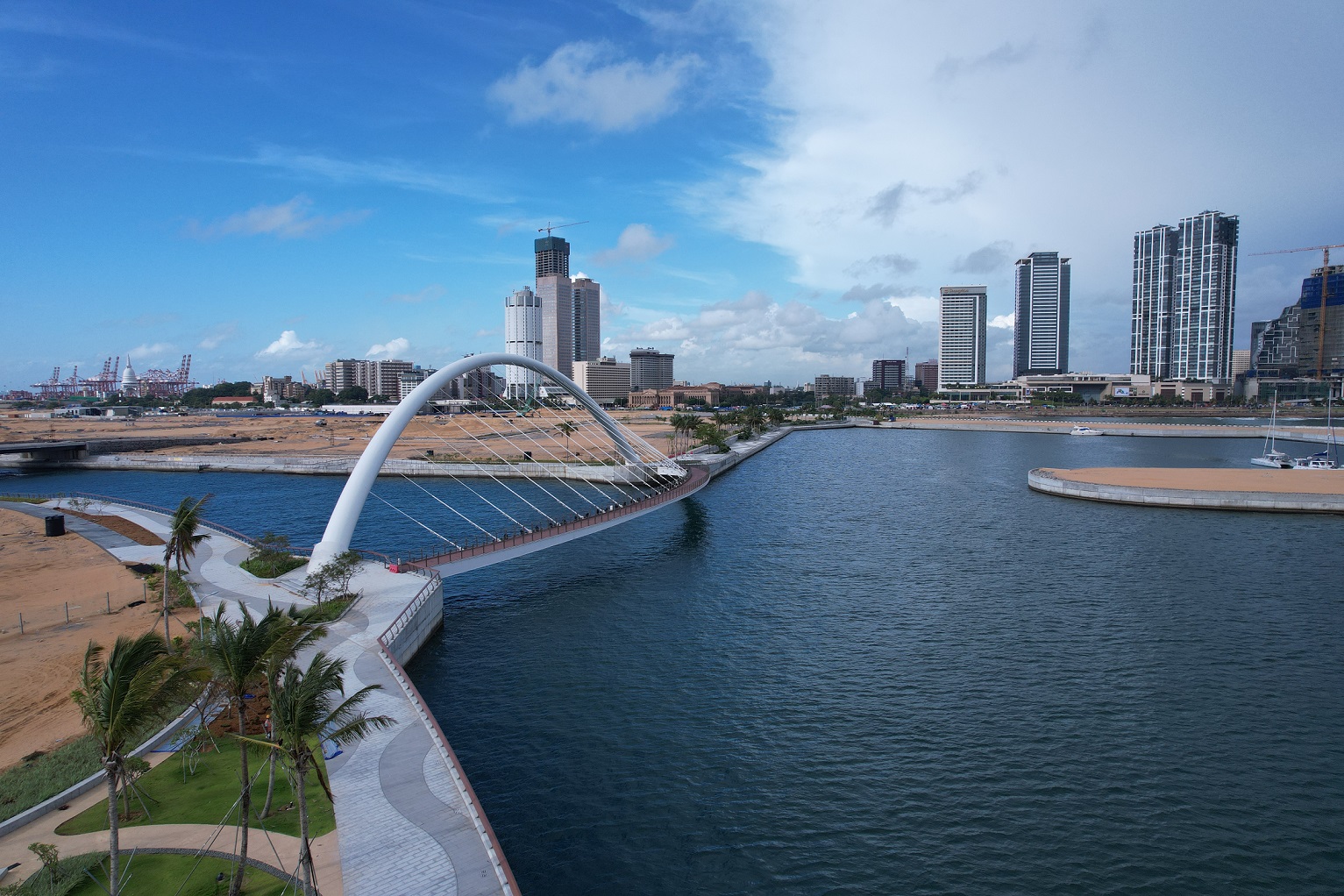 The Commission has put in place simple interim rules to handle investor queries, and established a formal financial management and accounting procedure. Port City Colombo’s investors will be from across the globe, starting with the subcontinent, and one of the Commission’s main objectives is to promote the PCC to be a leading SEZ in the region and an attractive investment destination, which will lead to enhance foreign direct investments into the country.

Like the Port City Colombo, which is connected yet separate from the Colombo City, the Dubai International Financial Centre sits as an independent city in Dubai.  While it is separate it is also very much connected to that country’s economic growth.  The DIFC operates within a unique legal framework based on international standards and principles of common law, to create the right environment for financial services and related industries to thrive.  These are the kind of ring fencing regulations the SEZ needs to ensure ease of doing business for global players looking to invest and live in this region.

Unlike the DIFC, the SEZ has the location advantage of being amidst a well-known, paradise holiday destination.  That, combined with our human capital, rapidly expanding IT markets and services that can align with the SEZ, gives it the right potential to attract FDIs and promote the export of our services. A conducive environment with business-friendly laws and regulations for the SEZ, will ensure ease of doing business and establish Port City Colombo as one of the region’s top commercial cities, which will in turn add great economic value to the country, generate employment and ensure prosperity to those looking at careers within the new city.

CHEC Port City Colombo’s plan in developing this new futuristic city is intended to raise the bar for the real estate developers of this country. Grade ‘A’ office and living spaces are the norm and every developer expecting to work in the new city would have to comply with set standards.  Port City Colombo’s Development Control Regulations (DCR) are a benchmark for Sri Lanka, in making lifestyles easier and less stressful.

The project company, engaged Surbana Jurong, one of Asia’s largest urban, industrial and infrastructure consulting firms based in Singapore and UK’s largest engineering consultancy, Atkins, to prepare the DCR to the existing Master Plan, which was originally done by Swedish-based planning consultant, SWECO.

Surbana Jurong took the key essence of the previous Master Plan and refined it further through urban design guidelines, in preparing the DCR for Port City Colombo.

As Surbana Jurong GCEO Wong Heang Fine said in 2018, “The soul of the project is sustainability and quality lifestyle. The urban structure of the Port City is designed for liveability, social security, tolerance and inclusion, thereby contributing to a higher quality of life. It emphasises a well-balanced relationship between the public, semi-public and private realms, where different kinds of spaces give rise to a wide range of uses and activities.”

The DCR provides a clear mechanism for the implementation of the Master Plan and directs both public and private sector developments with a set of objectives, definitions and regulations.  The regulations which cover every sustainability aspect, extend from commercial activities to residential living and everyone who operates within the city.  The finalised DCRs spelling out the rules of engagement with Port City Colombo were gazetted by the state in April this year.

A fundamental characteristic of a smart city involves optimising city functions and promoting economic growth while improving citizens' quality of life, through the use of smart technologies and data analysis.  While the SEZ will use solutions based on the Internet of Things (IOT), it has a unique location advantage.  Sitting next to the 500-year-old city of Colombo helps Port City Colombo to draw on the ethno-cultural diversity of the people who live and work there.

Cities thrive when they are located beside ports and vice versa - ports grow well alongside cities. The Colombo Port became the country’s trading hub during the time of the British colonial rule. But it has been known as one of the key trading centres in the island, even before western colonisers popularised the destination.  Chinese and Arab traders frequented Sri Lanka’s ports, which connected to vibrant trade routes extending across the world, long before European colonisation.  It is home to possibly the greatest ethnic and religious mix in history.  Ports and cities complement each other and can have great synergies. The Port City Colombo formula is the ideal solution for the economic and social renewal of the capital city, while the Port City Colombo will draw from the 500 years of tradition, culture and commerce of the old city.

The SEZ being in the western province which records the highest contribution to the country’s GDP is another vital factor.   It is also significant that over 60% of the western province’s economic activity comes from the service sector.  Given that Port City Colombo is also mainly in the service industry, there are great synergies that can be drawn from the old city.  For example Sri Lanka’s public and private education systems are well recognised in South Asia, therefore the country, especially Colombo, has a highly literate population. This means, apart from synergies like electricity, water and telecommunications, Port City Colombo will draw from the old city’s pool of knowledge and skilled human resources.

The Special Economic Zone is expected to have a spillover effect to the rest of Sri Lanka through the creation of job opportunities, knowledge transfer, tourism and hospitality promotion, transport, raw materials for construction, and fresh produce. 100% of development capital and doing business capital needs to be raised overseas which may further encourage FDI inflows into the country.

The Old and the New 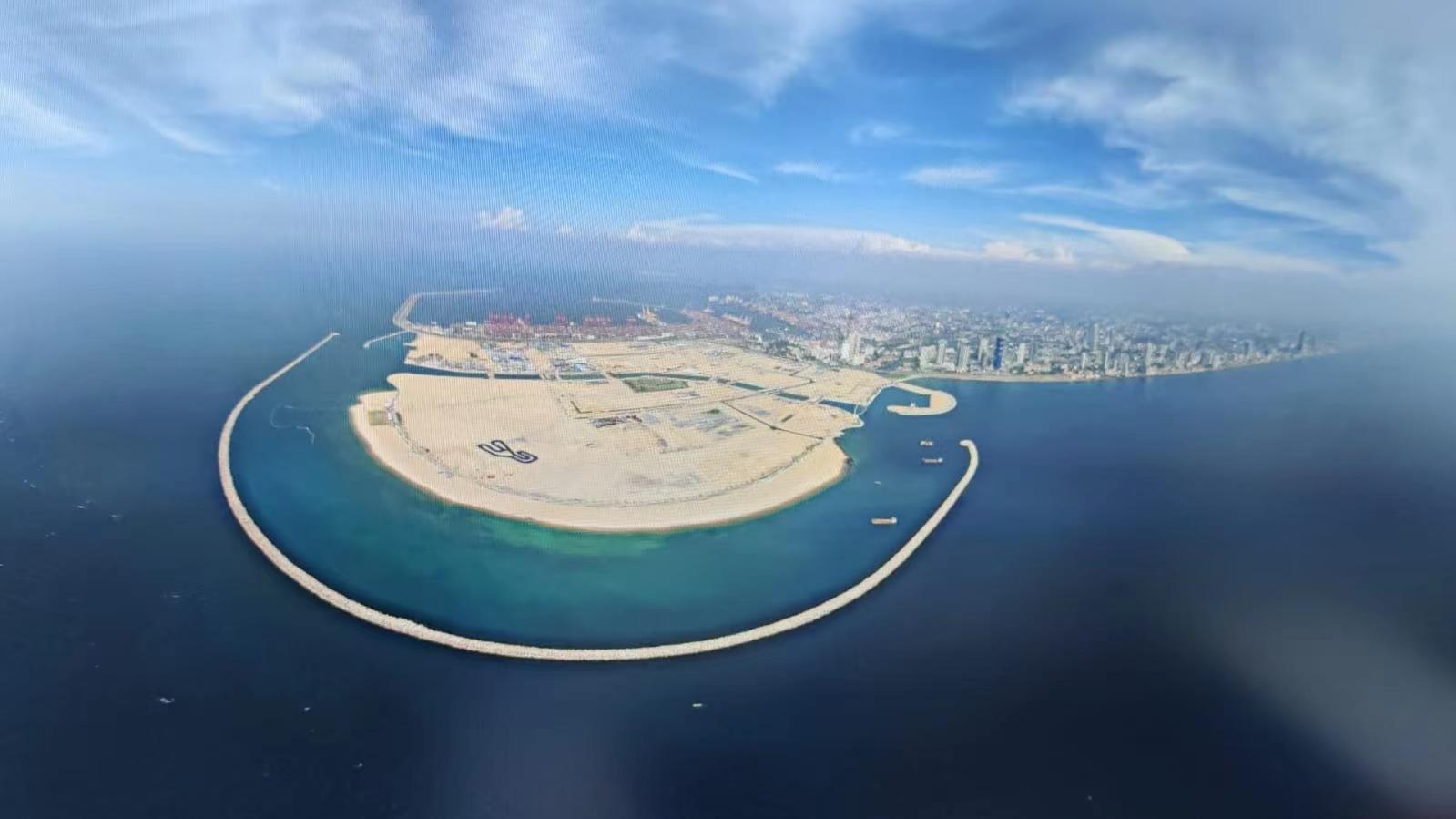 The existing Colombo Business District (CBD) is characterised by straight, tree-lined streets and angular open spaces. The area contains pocket parks, many with water features, to cater for those working in the City.

While Port City Colombo is designed to have a seamless connection with the existing business district, there is an essential difference between the new city and the old.  Port City Colombo will have about a tenth of the time the old city had to grow into maturity.  But the vision for the new city is on another time scale and it really is a long-term plan.  While the old city is looked at from the individual investor’s point of view, the new city’s vision and planning are set out scientifically, with world-renowned standards, from environment to future proofing in readiness for the upcoming 4th industrial revolution. The new city will position its investment structure on a totally different footing with laws and regulations that will attract a whole new level of clients to Sri Lanka.

Port City Colombo set a benchmark for the Sri Lankan industry, with the first ever international design competition they held in 2017.  The competition was to create a sustainable design plan for the City’s Financial District and Marina, which are common areas that directly connect to the existing Colombo Fort.

Three of the world’s best Architecture, Interior design, Engineering and Urban Planning firms, Nikken Sekkei of Japan, Gensler headquartered in San Francisco and Skidmore, Owings & Merrill (SOM), from the USA, competed in the International Conceptual Urban Design Idea Competition. SOM emerged the winner, and the main criteria for their success were the green and blue aspects included in their plan and the innovative way in which they had incorporated features of the existing city of Colombo into the new Port City Colombo.

The Port City Colombo has already won accolades for its world class masterplan, engineering and design.  Some of the milestone achievements by the new city during its first phase was winning a Gold award at the Yuan Ye Urban Design Awards 2018; a Silver for Master Planning at the Singapore Landscape Architecture Awards 2017; and  being selected as the ‘Global Best Project’ by International Engineering and Construction News magazine in 2020.  The project has received recognition as a marvel of modern engineering at several prestigious forums across the globe.

In Colombo, the two cities will coexist in perfect harmony. The SEZ will attract new ventures with attractive investment incentives that can act as a catalyst for spillover investments into the old city. As Sri Lanka goes into the next stage of evolving as a global player in FDI opportunity, the Western province of the country, with the highest provincial GDP will play a significant role.  With high emphasis on industries and the service sector and its jewel in the crown, Port City Colombo, the western province is all set to push the overall GDP of Sri Lanka.