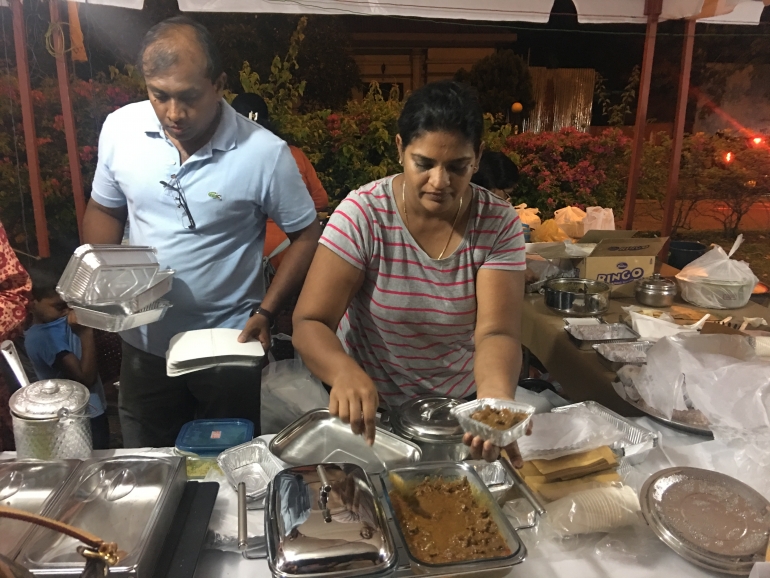 For the first time in Sri Lanka, the Bharathas showcased their culinary abilities in public at the WINGS Food Festival. (Scroll down to view video).

Bharatha food has its own mix of different traditions which come from a South Indian genre laced with probably some Portuguese influence. There is special emphasis for meat and sea food but a pure vegetarian would also be equally liked by this community.

Recently, the community produced their own recipe book, and the following is some excerpts from its forward:

The coastline of the Gulf of Mannar on both the Indian side and the Sri Lankan side is home to many Bharathas and has been so from time immemorial. A quick search on the Pearl fishing along this Gulf will throw up that the Paravas (Bharathas is the modernized & now preferred version of Paravas used by the community) were the pioneer exploiters of the pearl oyster resources of the Gulf of Mannar, and their history is closely linked with the history of the Pearl fishery in the Gulf of Mannar. Records from as way back as the 1st and 2nd century AD refer to the Paravas who were the pioneer exploiters of the Pearl Fisheries in the Gulf.

One document of the Pearl Fisheries of the Gulf says:

“The Paravas were a coastal dwelling people since ancient times inhabiting the coastal regions on either side of the Gulf of Mannar, both in Southern India and Northwestern Sri Lanka, traditionally exploiting the valuable pearl resources of these coastal regions, and apart from pearl diving, also engaged in other sea-based professions such as conch shell diving and cutting, fishing, boat building, sea faring, navigating and salt making, as well as trading the valuable products of the sea. In keeping with their sea-faring lifestyle, they were also excellent ship builders, and their catamarans were the first type of ship encountered by the British with two hulls… The Paravas also tended the palm trees that traditionally grew in their environment, such as the Palmyra and coconut palms, and laurel trees (punnai trees) that were considered sacred.”

While various theories have surfaced as to the origins of the Paravas, each vastly different from the rest (among these are that these people are of a regal Pandiyan ancestry; of an Aryan-Sanskrit heritage originating from Ayodya; that they originated in the Indus Valley, the cradle of human civilization; that they originated from the ancient Naga tribes of Sri Lanka; and one post conversation theory of a Judeo- Christian origin), they all point to the idea that they are an ancient and distinct group of people.

While many of the Bharathas have been assimilated into the local communities, for instance, in Sri Lanka the Paravas who historically lived from Puttalam to beyond Mannar have been assimilated into the Tamil community, while many who migrated post colonization into the Negombo area into the Sinhala community. The identity of the Bharathas are held onto fiercely by those who came in the last century to make their livelihoods in Kotahena and other parts of Colombo, Ratnapura, Matale, Kurunegala and many other towns. Whatever the origin, there are some things about their lifestyle that the literature refers to which seem pertinent to mention here.

While it appears that the Bharathas always liked a drink at the end of a hard day’s work or to celebrate, there is record that they also loved their food. For instance, rice and fish curry has been the staple food of the Paravas from time immemorial. P.T.Srinivasa Iyengar says that the “Paravas cooked rice with a soup of aiyilai (mackerel fish), flavored by the addition of tamarind. Fish naturally played a prominent part in the diet of the Paravas both rich and poor. They gathered together under the Punnai (laurel) trees and made merry with arrack and toddy.”