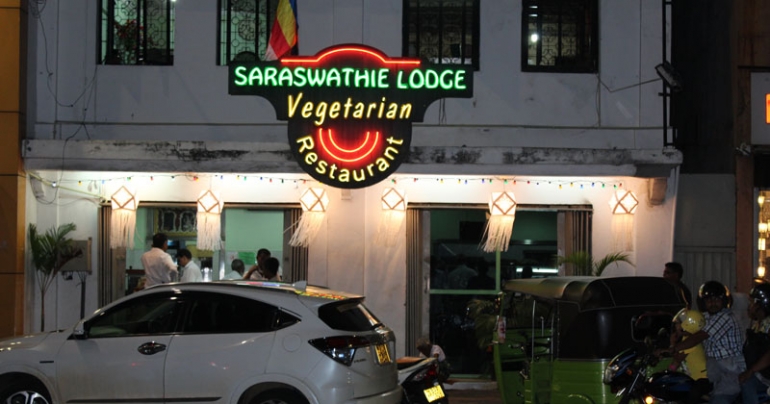 There were some interesting bits of news in the papers about a week back, with some stories having a certain thread running through them. The US Ambassador Patricia Butenis visited the Coca Cola plant in Biyagama. The British High Commissioner John Rankin visited Unilever Sri Lanka’s newly built factory in Horana and the new Chinese Ambassador for Sri Lanka making a courtesy visit to the Sri Lanka port to inspect the ongoing Colombo Port expansion project which is being built by a Chinese company. All this within few days of each other. Seems like a new trend – the Diplomatic Corps supporting their national brands…

Which got me thinking about another possibility along the same lines – what about the Indian High Commissioner visiting the Sarawathie Lodge, and that is not meant to be funny. This restaurant is an icon for Indian food (rather South Indian Food) and last week they celebrated their 70th birthday. Established in 1942, its grown to be a well-known spot to get the best South Indian vegetarian food in town.

I have been going to this restaurant from my school days and can count over 30 years of enjoying a good meal there. Restaurants like Sarawathi’s can be described as Sri Lanka’s first fast food outlets; long before the McDonalds, KFCs, Pizza Huts or Dominoes of today. And most certainly when it comes to speed of delivery, it is the ‘Pony Express’ of the business – the food is dished out at a very high speed on to the plates (no longer the use of banana leaves) and if its Thosai one is eating, the splash of the plentiful sambar as it hits the plate is something to watch out for.

Celebrating 70 long years of service in itself is an achievement for any restaurant, especially for Saraswathie’s which falls into the category of a ‘Saivarkade’ which is actually derived from the word ‘saivam’ meaning vegetarianism. Some of the history of this restaurant has been a bit bumpy especially in 1983 when the mobs attacked the shops and they had to close down for a while. But the resilient management of Saraswathie’s bounced back and once again we had excellent vegetarian food after everything settled down. I know people who come from all parts of the world looking for that Thosai and the Milk Tea which were an essential part of going down memory lane back to their school days. Sarawathie lodge does not have the suave of a brand like Coca Cola or Unilever, nor is it marketed like McDonalds or Pizza Hut but it has withstood the test of time. There would be hardly anyone in Colombo who hasn’t enjoyed a meal there at some point.

I’m told that this particular type vegetarian restaurant (and there are many in Colombo) is run by a group of families who belong to the Reddiar clan. Reddiar a Tamil word – reddi-yay (the yar is a term of respect) is synonymous with Reddigaru (Telugu word Reddi(Garu)). Reddys predominantly speak Telugu, whereas Reddiars speak a combination of Tamil and Telugu (variant with Tamil influence) and identify with as well as follow Tamil and Telugu cultural norms. They come from Tamil Nadu and most of them are Vegetarians.

Someone told me recently that my columns tend to have black humor and so when I say that the Indian High Commissioner must pay a courtesy call to Saraswathies on its 70th year they might think that I am being funny. But I mean it in all seriousness, considering the fact that India and Sri Lanka need to find connecting points on various levels instead of just Menon coming to tell us what do!

An article I read in the Indian Express recently said “Traditionally close Indo-Sri Lankan ties forged by shared culture and ethnicity and reinforced by history and legend, are showing signs of coming under strain. Partially caused by New Delhi’s failure to provide more forthcoming policy responses to Colombo’s requests, India’s diplomatic influence is now getting eroded. China stepped in to occupy the space and has, of late, begun expanding its presence in Sri Lanka. It is acquiring a meaningful presence in the political, commercial and cultural sectors. It is already influential in Sri Lanka’s defense establishment.”

This article written by JayadevaRanade a former additional secretary in the Cabinet Secretariat, of the Government of India, is all about China stepping in to India’s shoes in Sri Lanka! The last paragraph of the article says “India needs to evolve steps to ensure that its influence in the region does not shrink, its foreign policy objectives and national aspirations are not compromised, and its interests are protected. It must, among other measures, capitalise on its inherent advantages and increase its lead as the largest source of tourism, direct foreign investment and export market for Sri Lanka.”

This brings us to a point that needs to be talked about; India needs to get beyond their Tamil Politics. I am in no way saying that Tamil politics is not a burning issue. But there are many communities in Sri Lanka who have close connections to India, and India needs to build bridges with them.