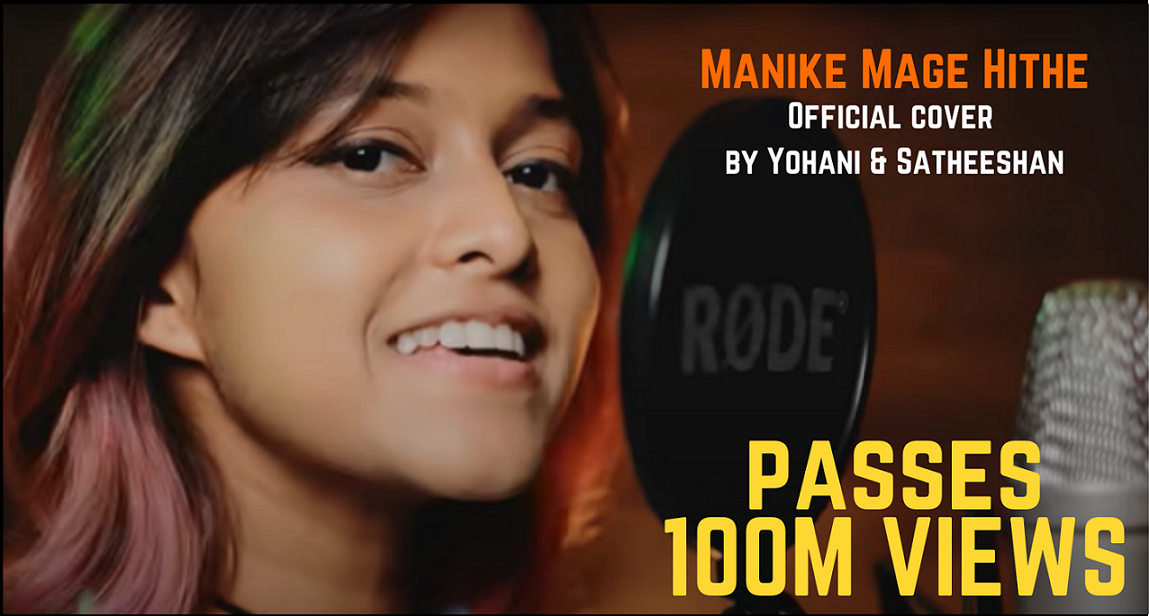 Manike Mage Hithe by Yohani de Silva is going viral in pandemic proportions. It is a quaint catchy song which took on a surprisingly high hit rate in Sri Lanka before it spread like wildfire across the world. The song is not an original by this singer. The original released a little over a year ago can be found on Youtube but not as popular as Yohani’s rendition. So why the craze for this particular cover version? “It’s the timbre of her voice,” says Kumar De Silva, an expert on vocals and presentation.

Timbre means the quality of a sound made by a particular voice or musical instrument; timbre is useful in being distinct from pitch, intensity, and loudness as a descriptor of sound. There are those who would even go as far as to say that Yohani cannot handle a tune. But today, I am sure over a 100 million people would say the opposite, and that is where we need to look to find the reason behind Yohani’s beautiful success.

The way this writer sees it, Yohani’s ‘Menike Mage Hithe’ is a jazzed up version of the original. She has made the song more interesting, exciting, and addictive. It is in the quirky things she does to the lyrics and the way she twists the tune that makes her version of this song so unique.

What is so unique about this song?

If Yohani chose the song for its lyrics then it would seem inappropriate (as this would traditionally be a song sung by a man to a woman) and we are yet to know her reason for choosing this song. But one can well believe she chose it for the tune which suited her timbre. The song has been analysed in detail and in one of them an Indian Youtuber dissected it to understand why this has struck a chord with everyone. He breaks it down to even the syllable counts of the lyrics that maintain the beat. The analyst says it is an earworm. The song is simple enough to stick in the head with small twists to break the monotony. The second reason he presents is that the language itself makes the song sound sweeter, and proceeds to explain the origin of the language. His final point is that the artist herself is perceived as beautiful and also does a great job communicating with the audience with her expression and eye contact, so even if you don’t understand the language, her expression compensates for it. And her voice has an interesting husky tone which Indians have come to associate with modern indie artists and westernization which they believe gives a song a polished, refined feel.

Yohani’s song and its popularity is the best thing that has happened to Sri Lanka in a very long time. Whilst one does not want to become mercenary about it, we need to position her as a national treasure. As the song itself is beginning to be known as ‘Manike’ internationally, which at its best means a precious stone or gem (‘Manika’), Sri Lanka can ride the wave by looking at this as a national brand by itself. And for those who do not know the underlying subtleties of this word it is also used as an endearment to a woman who can be your wife, girlfriend or daughter. However in the case of the song it is amorous and refers to the relationship between a man and a woman.

The word ‘manike’ has been used in many Sri Lankan songs, many local artists of a bygone era used this term as it was a popular form of endearment for a woman you love. However none of these artists succeeded in becoming so popular. One can blame it perhaps on the fact that they were not creating Youtube stars in those times. But it is very clear that Youtube or not, Yohani has that character and personality to be attractive in the way she presents her piece.

The question now is, what does she do next? Where would she go from here? Because clearly her success does not depend on this one song, but in the next. In an interview she gave NDTV, she responded to that same question saying she was working on some originals and some covers, so guess we have to wait and see.

Sri Lanka has been known for its baila and its popularity across the island is well established. However, we have not exported our version of this Portuguese influenced music to the rest of the world with any success. ‘Manike’ is not strictly in the baila genre, though one could argue the baila can be danced to its tune. As Kumar de Silva says, “one can even do a strict tempo foxtrot to it.” To Kumar this is a sensation like the Lambada in the 80s where the whole world went mad over a song they really didn’t understand but would dance to it because it sounded good.

One thing about Sri Lanka is that our cultural gurus like to stick to the straight and narrow and to them the thought of a nontraditional song with rap lines to it, doing any good to the local culture may seem quite far fetched. They may even frown upon it and at worst go into a full scale tirade. Therefore to beg the question — can Yohani’s success be recognised and celebrated as a new level in our identity as Sri Lankans? This writer believes it is particularly important to do so, because this song is being copied and duplicated in various versions and has inspired artists in the west to play it as a popular hit, not to mention some of the greatest entertainers endorsing the song — the likes of Amitabh Bachchan. However, one artist, a young violinist who has uploaded a violin cover of the song on Youtube, gives it the wrong description. Although she attributes it to Yohani and Satheeshan, she describes it as a beautiful Indian song. What an opportunity lost to us in positioning Sri Lanka. It is clear that Yohani is already being targeted by India, as seen in the recent interview with NDTV, where she is asked about collaborations, and her interest in working with the Indian music industry. She lists a few names, and while it would undoubtedly be a great opportunity for her, we should not lose her by not positioning her as a Sri Lankan artist.

Whatever the future holds for this very talented young lady, one thing for sure is that she is going to take the internet by storm. As to whether she is going to be recognised as a national treasure — it's all in the hands of those cultural pundits. One can only hope their heads will not stay buried in the sand.